Over a period of 14 days and 13 nights there, this circuit is a fairly standard circuit. Indeed, it will be particularly focused on the visit of the temples, the discovery of the Maharajas of India. Palaces, architecture and museums are some highlights of this journey. Other aspects of India will not be neglected in order to provide you with a vision as faithfully as possible in our country. 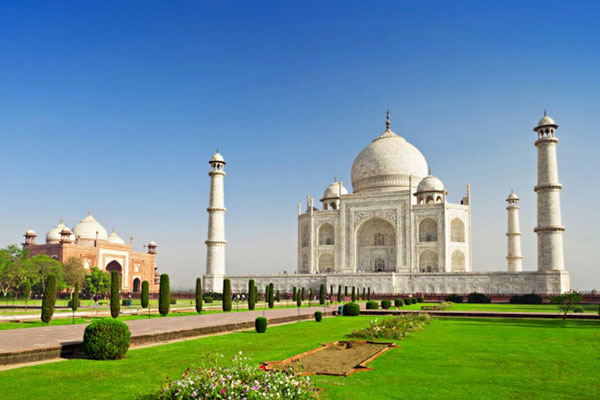 At the airport, you will be greeted by our driver-guides later in the evening. You will then be transferred directly to your hotel in Mamallapuram. The next day you will visit the village of Mamallapuram. The city was one of the capitals and port Palava kings of Kanchipuram who ruled after the Gupta Empire. Most temples were erected under Narasimha I and II. Many of the city temples are dedicated to Shiva and Vishnu since has become one of the rulers in the seventh century to Shaivism. These are the remains of this great time we invite you to visit: Discovery of bas-relief representing the "Descent of the Ganges." On the seaside, you can see the temple of Rivage, it faces the waves for 13 centuries. You will also visit the South Rathas: These are monolithic temples shaped floats procession. Lunch at a charming restaurant on the waterfront.

Departure for Pondicherry, a former French colony. It was purchased in 1673 at Bijapur Sultan. The city became the main French trading after the Indian struggle against the British in the seventeenth century. You will visit the ashram of Sri Aurobindo the cenotaph of the''Mother.''Walk through the old neighborhoods inhabited by the French: items, books, French Alliance and other buildings from the period. Frequent halts are planned before the buildings that have marked the history of the city. Your driver will explain the history of the city since its creation and organization in particular Black and White City. Installation in the Indo-French colonial house that will be your hotel.

Departure at 8 am to Tanjore. On the road, you will visit the temple Gangaikondacholapuram, dedicated to the god Shiva. It was built in the XIIth century by the Emperor Rajendra Chola I. The ornaments of its walls and its large pool bear witness to the richness of that time. Lunch at Swamimalai in a traditional house in vegetarian cooking. In the afternoon, visit to a factory bronze statues, silk saris as they are done for centuries. You will have the opportunity to visit the oldest temple in South India in Darasuram which was built by King Rajendra of the Chola dynasty in the twelfth century. Dedicated to the god Shiva, he deserves that one stops there. Arrival in the evening at Tanjore. Night there.

Departure for Chettinadu. Chettinadu region was inhabited by a community of rich merchants, Chattiars, who built the baroque houses quite unique. The visit of the Palace Museum and some of these houses abandoned or often still inhabited, will give you a very complementary approach to the rich culture of Tamil Nadu apart from its religious shrines. A craft tradition is still very much alive in this region and you can visit workshops on wood, silver, textiles as they did in the days of Maharajas premises. Check into your hotel Chettinadu Palace Masion is a former royal palace of Chettiar.

Madurai is one of the oldest cities in South India: it was the capital of the Pandya kings in ancient times. From the tenth century, it came under the rule of Chola who greatly embellished. The city has also been a Muslim influence when Sultan Malik Kafur captured it. Great animation reigns at all times: the streets are constantly invaded pilgrims, beggars, merchants, oxcarts and rickshaws.

It is the cultural capital of the Tamil country and the Mecca of Hinduism, you will admire the palace of Tirumalai Nayak founded in 1636 by the Indian prince. You will then discover the Temple of Tiruparakundram carved into the rock. Free walk in this city very much alive, then visit the afternoon of the Temple of Minakshi Sundareshvara Vijayanagar style.

This shrine, one of the most vibrant in South India. It is dedicated to the goddess Shiva and Minakshi. It was built in the seventeenth century during the reign of Nayak. A detour through the bazaar of the city will be a good way to end the day. Free dinner.

Departure for 10 hours to visit Thekkedy. Then you cross the plains thriving Tamil. You will then arrive at Periyar National Park which is located in the mountains of India. It includes nearly 800 km2 of wilderness. Discovery of the plantations of spices (pepper, nutmeg, cardamom etc ...) and then cruise on the lake. In this beautiful setting, you can see deer, monkeys and numerous species of birds. The check-in is scheduled for early evening.

Alleppey is one of the sites marshes of Kerala's most exotic. Bordered by the sea and dotted with canals, it is rightly the nickname''Venice of the East.''Built by the Chera dynasty, she was in ninth and tenth centuries a center of religion and culture radiated throughout the region. Backwaters of the country around it is also very rich in plants and birds of all kinds. Agriculture in the region will amaze you with how it has shaped the landscape. In turn you will discover other features of this charming village: traditional manufacturing coir, the market along the canals.

The price of the boat and meals are included in the price. Lunch, dinner and breakfast will be on board.

The city of Cochin is a former Portuguese trading and Dutch. The city is renowned for its scenic bay and the spectacle of large fishing nets deployed along the shore (plaice Chinese).

You will discover the city and its old quarters in the rickshaw, you will have the opportunity to see the Church of St. Francis, the synagogue was founded in 1568 and renowned for its blue tiles and the palace of Mattanchery. This palace is also commonly called the Dutch Palace.

In the evening you will attend a performance of Kathkali, a play in costume drama, singing and dancing. Topics discussed are the major themes from Hindu epics. The dinner is free.

You fly to the airport in Cochin and Chennai. Arrival in the afternoon. Visit the Museum contains all objects related to the Indian rulers of all periods. Dinner at the hotel.

Day 12: Chennai - Paris (or Other Destination)

You fly to the airport in Chennai and to Paris or another destination. You will arrive in the afternoon.

If this tours suits you, contact us, we will send you a proposal for hotels and the price of our all inclusive packages.
This tours can be done by individual and in groups of several people.
It is also possible, if desired, to prepare a custom tours.